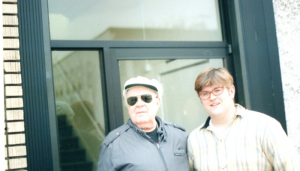 I recorded these for an interview for a research thing. It was fun so I thought I’d put them up here. I was in Ghana and during the recording I get interrupted by my wife, nearly burn down the hotel room, there’s a lizard, and my wife read more

I am working on accepting and admitting that I am at times an arsehole.

An arsehole who denies he or she is an arsehole is a much bigger arsehole and much harder to be around.

So by admitting and accepting that you are an arsehole you kind of stop really being an arsehole.

It is known as the arsehole/not an arsehole paradox.

It is the run in to doing Kidsamonium on the fringe. I am really crapping my pants on many levels to the extent that I am fantasising about this being over and going fishing somewhere for a day on my own and, while fishing, really thinking about jacking this all in – music, bandleading, Kidsamonium, ABC, everything involving stress. I’ve had enough for one year.

It seems to be getting worse as I get older and more successful. I occasionally have a fatherly word with myself and go “It’s ok tom it’s called “being nervous” and is all part of being a performer and creative artist. This is normal. Everyone gets it probably more than you because for so much of your life you have been an over confident bombastic asshole”.

That calms me for a minute or two then I got back to the churning anxiety…..

There are a lot of factors here. My band are coming in for 10 days and bringing their families and staying in my mother’s house…..

I need to get enough kazzos for the show if it does really badly or sells out, ditto with percussion. The venue is structurally cool for the usual promenade section of the show but now the venue manager is telling me we cant do it cos of other users of the building and health and safety. I don’t know where I am going to get the chicken gang members from – usually we have a local youth big band or school kids working with us as we do one or two shows. Now we have 8 shows and it is bang in the middle of the holidays and my feeble efforts to date (including articles run in all the local press) haven’t rumbled up any chickens. We normally have guests from the jazz festival we are in and I don’t have any of those either. Finally the really cool section with 3 circles (see branford on the you tube video) wont work here. Have I left it all too late………….

Then I have been veering to a kind of manic – it will be fine, it will work itself out, it always does – that is what the job is ie working it out. I will make thousands of pounds profit, we will sell out, and we will win a Herald Angel……Then that passes fairly quickly…..

I am thinking “this is a creative challenge” but I have been so busy with ABC workshops and other stuff that I am really not sure if I can work out how to make the show work in the time left whilst feeling this stressed….. In addition I stand to lose loads of money and I need to keep focus on the promotional push. Today I found out there was a cock up with the printers and the flyers and stickers may not arrive until the end of the run…..AAARGH!

So as usual some solutions have arrived. Flyers & stickers arriving on day of first show. After a period of creative grieving I have decided I need to be positive and proactive and change the show to fit the venue and circumstances so : – ditch the parade, ditch the guests, ditch the 3 circles. I woke up realising I needed percussion that was soft enough to play on the edge of the wooden pews and very cheap so I could buy hundreds of them. I imagined some soft plastic tubes that made a sound when you hit them….I went on the net and THEY EXIST and they are called BOOMWHACKERS. They are very cool (and ABC are going to start selling them to our customers).

So I got them and I realised they would actually improve the 3 circles section cos the audience could use them in colour coordinated groups to create chords and harmony.

I had this other brilliant idea. If I bought a Loop Station pedal  I could loop the audience singing for this piece called ‘Streams’ where we split the audience into male and female choirs (or adult and kid choirs). If I got a condenser mike we could record the audience and loop it…couldn’t we…….I checked it out at a shop. It has a reverse button so you can then reverse the loop LIVE.

If I find out what Kidsamonium is backwards – some weird phonetic sound – I could get the kids and parents to chant it over and over, then Loop it and then reverse it so they hear themselves miraculously chanting ‘Kidsamonium’. What a brilliant ‘coup de theatre’ guaranteed to win a Herald Angel…..

So I bought the pedal at great expense rushed it home.

SO what is the strange sound I will need to memorise so I can get the mums, dads, and kids chanting it at the top of their voices before I press the reverse button.

NB This blog entry contains swearing. If you are offended by that DON’T READ IT!

I settled down in the seat on the tube, near read more