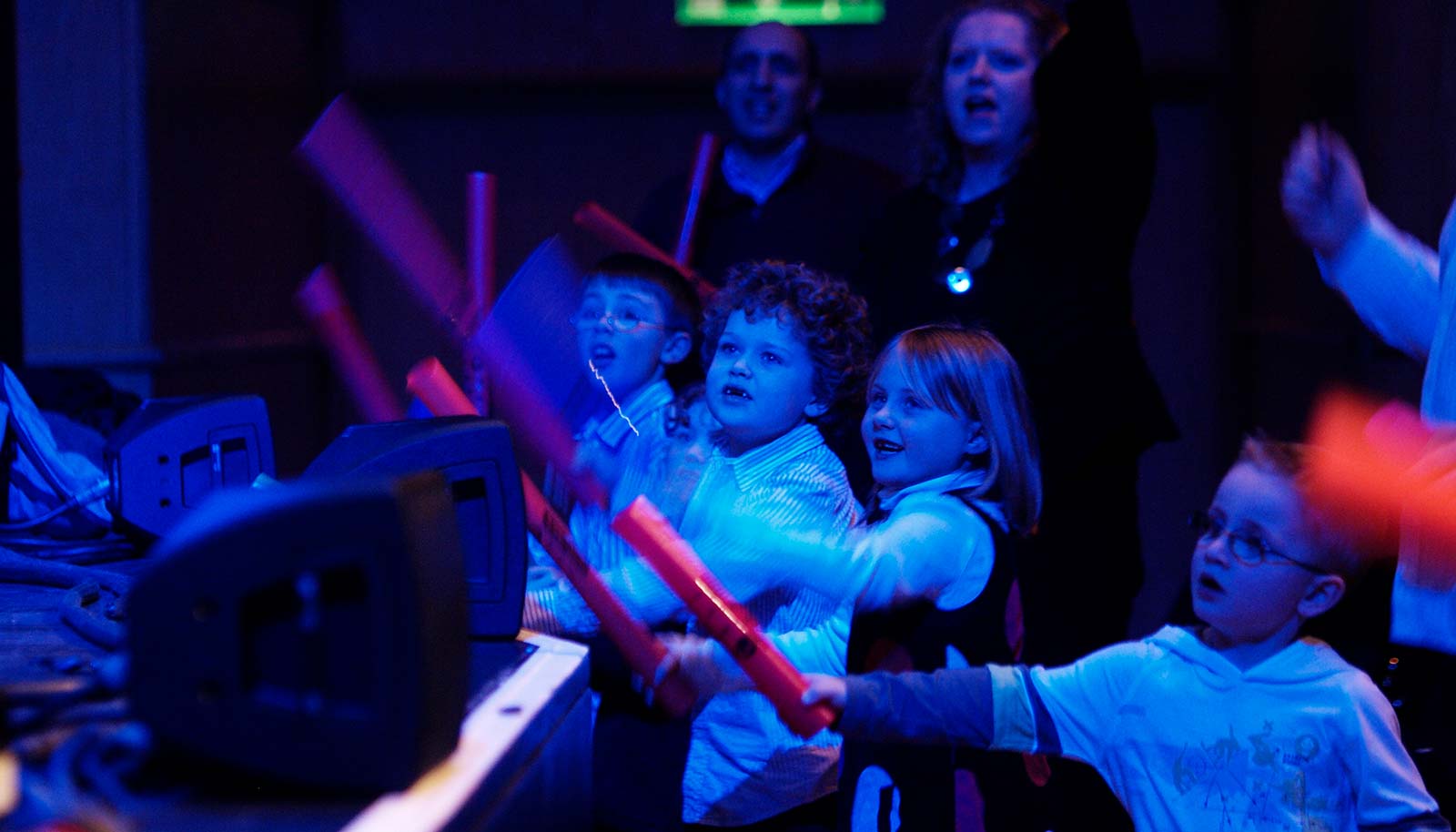 “Kidsamonium was one of the highlights of the Cheltenham Jazz Festival. Children of all ages had an extraordinary time, learnt about how music works but most importantly had fun. Children who thought they didn't understand music and perhaps didn't event want to try to understand it changed their minds in about an hour and a half! For both parents and teachers it was truly inspirational. “ - Alice Cooper, Development Director, Cheltenham Festivals
"Warning: Kidsamonium can seriously strain your smile muscles. Tom Bancroft's fantasia aimed at introducing children between six and 14 to jazz picked up the Innovation prize at the recent BBC Jazz Awards, and it could convert non-believers of any age. Bancroft emerges in Elvis regalia - and hilarious wigalia - as, of course, The King. As he marshals his sextet through swing, blues and folk-jazz and gets everyone playing kazoos, banging percussion instruments and shouting at the invading chicken gang, he assumes various personalities. Sometimes he's King Bossy, other times he's just King Nuts, but he has a real talent for involving people. There are elements of pantomime: when guitarist Billy "the Aviator" Jenkins goes off in a huff because he discovers he can't fly, the band has no way of playing chords. So different lengths and colours of tubing are distributed and volunteers are invited on stage to conduct the audience by pointing at three different sets of tubes. Result? Harmony is taught, if not necessarily maintained. The whole thing is great fun, and if Harry Potter re-introduced children to reading, then Bancroft goes one better: he even convinces them that putting stuff back is hip." The Herald *****
"A perfectly paced, beautifully structured and highly entertaining introduction to jazz improvisation" - Clare Williams, Llangollen Jazz Festival, 2007

Kidsamonium was a fun, magical musical event aimed at 6 to 14 year olds with a view to letting kids see the exciting power and freedom of jazz & improvised music up close in a format they can digest. Short contributions by a range of artists (including a join-in mass 'Percussion Discussion') combined with performances and interactive musical games by a crack(pot) troupe of musical characters  including the mysterious trombone playing 'Chicken Gang', the madcap 'Aviator' Billy Jenkins, the ‘Big Tuba Kid’ Oren Marshall, the Princess Laura MacDonald, the Dutch Tourist Joost Buis or Monsieur Parp Patrick Charbonnier, and Judge Claude Deppa. It was all led by Tom Bancroft ‘the King’. The show  also featured at different times - Phil Bancroft as Prince ‘Prince’, Buyron Wallen as the ‘Magistrate’, Brian Finnegan as ‘Cowboy Brian the BodyGuard’, and Chirs Greive as ‘the Surfer’.

Children listened to amazing feats of musicianship, as well as participated in a massed kazoo call and response session, improvised on a giant human piano, and created harmonies with the Three Circle Harmony Generator.

The show ended with the hilarious ‘Mum and Dad’s dancing” section.....

Kidsamonium was originally commissioned by The Sage, Gateshead and Cheltenham Jazz Festival.

Kidsamonium won The Herald Angel in 2007.

“Kidsamonium” ensured that the centre was packed with excited youthful audiences early in the morning, many of whom stayed on for the free concerts that followed. Dressed as an outsize Elvis, Bancroft has a sense of spectacle. The guitarist Billy Jenkins flew across the auditorium on wires, then the band burst into the foyer pursued by a brass ensemble of giant chickens, only to continue back inside with the whole crowd playing along on give-away kazoos. On the concourse, Bancroft placed coloured discs on the floor. When anyone set foot on them, a brass band on an upper level played a chord. Branford Marsalis and Andy Sheppard were among the high profile disc-hoppers, jumping from colour to colour, and improvising to the chords from above. The result? Plenty of delighted shrieks and laughs from dozens of under12s, many of whom were hearing live music for the first time." The Times ****